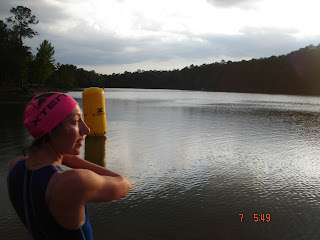 Well its certainly hot, down here in Shelby County, Alabama. But its great too, relaxed, laid back and some tight racing to boot.

The Xterra held today was fun, really hard especially the run, but I felt good and was psyched to be improving ( I think in the swim and finally on the bike ( I had the fastest time today) plus I felt good on the run, can't ask for more than that.) I was a solid fourth in the womens field and Brian had the 2nd fastest bike (despite a flat ) and 2nd fastest run to finish 7th in the mens field. As Kahuna Dave say's... what if he didn't swim like a rock?? ( it should be noted brians rock is faster than mine!)
Lisa Styling in her Mafia racing suit. 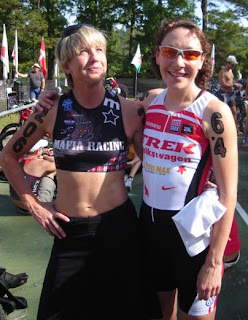 B'mans stepping it up on the usual #2. 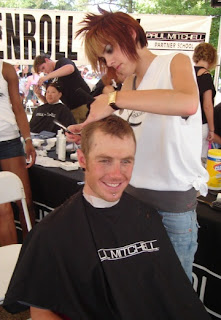 The Womens Podium. ( this is a first two Trek women on the podium at one time... right on!)Jamie put together a stellar run to take the win from a consistent Melanie and even more consistent Candy Angle. I was 4th and my Texas Trek Teamate Shae Rainer was 5th. 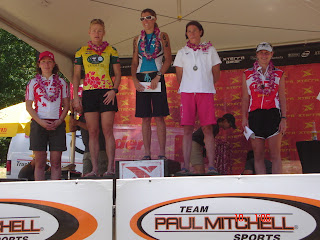 Our Southern Down home BBQ : Biscuits, corn on the cob, blackeyed peas ( with Ham knuckles), beef and bean casserole, and good ole BBQ chicken. It was not for the faint hearted diner or Vegetarian for that matter. 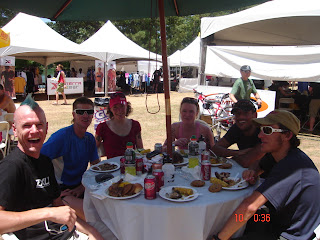 Remember, if you want to train in CA before Hawaii you have a place to call your own.... just let us know in advance.

Brian should rock the Mohawk! For real..... no I am serious....seriously