Brian and I along with our friends Gale and Gary had a great ride at Hartmans rocks today, the summer thunderstorms have bought new life to the sandy trails out there and made the riding fantastic. It was a rare ride for this time of year without an agenda or plan. Consequently we hit a number of the technical trails which was really challenging and fun with a group.

Brian's new front triangle arrived for his fuel which is super exciting as soon he'll have his bikes back up and going, he has given up even feeling frustrated about his mechanical's of late as each one has been ridiculous in its own right and not necessarily avoidable: 2 broken frames, 2 broken new chains, 7 -8 flats on at least 5 different types of tires... surely the run will end soon.

I rode with my friend Tressa Breindel last Friday- Tressa suffered from ulcerativecolitis for many years prior to a correct diagnoses about 5 years ago. Since then shes had operations where her large intestine has been removed. (clearly I don't understand it all.... but I do love the knowledge she has of her body and the sense of humor she keeps regarding its workings)'. She is doing fantastically well, is about to complete her undergrad degree at CU in Boulder and working in a lab grad program studying Chrohns disease.

In addition for kicks she runs! On August the 18th she is running the Leadville 100 event. ( How awesome is that, oh only about 20 + hours on her feet) I of course both think its crazy and am superbly impressed and in awe of her studlyness.

Tressa rode my fuel the other day and liked that it had my name on it. Now in the name stakes... I have to share this picture of Melanie Mcquaid who's helmet tops my custom list. It came with her name and a diamond embedded in the side. Definitely Euro and certainly a class above some of the cycling fashions of late 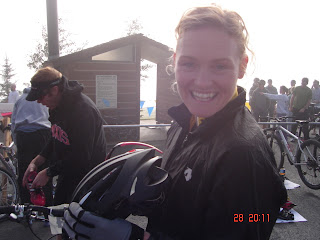 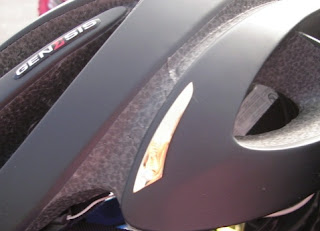 Posted by Jenny Hopkinson Smith at 5:43 PM No comments: 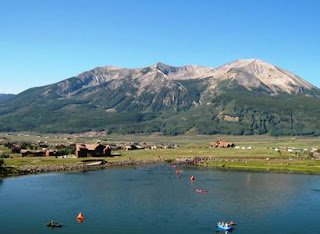 Smith, Middaugh Conquer The Favorites At XTERRA Crested ButteThis report filed - July 30, 2007Jimmy Archer Inside Triathlon web editor
Photo Credit: Jimmy Archer.
The view above the XTERRA Crested Butte swim start..Over it's five years of existence the Crested Butte Bank Crested Butte XTERRA has become a favorite and somewhat exclusive (entry is capped at 200 athletes) destination of the XTERRA faithful. With an absolutely amazing course nestled in the heart of Colorado's most spectacular scenery the race is without a doubt one of the World's truly great off road triathlon events.
Crested Butte's challenging course, prize purse, and vicinity never fail to attract a strong pro field consisting of many of XTERRA's strongest athletes, this year including '06 World Champion Melanie McQuaid and '06 National Champion and World Championship third place, Seth Wealing. However, the story in Crested Butte would be of challenges to the throne as high altitude locals Jenny Smith and Josiah Middaugh would usurp the pre race favorites in two of this year's best head to head XTERRA battles.
Women's Race: A new contender? 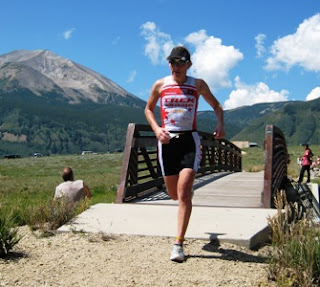 Jenny Smith's strong bike brought her to the lead, her strong run brought her the win.For several years the women's XTERRA scene has been dominated by two names, McQuaid and Whitmore. Canadian Melanie McQuaid and Californian Jaime Whitmore have had a back and forth tug-o-war for XTERRA supremacy that has rarely seen another woman crack their strangle hold on the top two positions. When in the rare event of another name appearing within the top two it was usually due to extenuating circumstances of an injury or mechanical failure. However, don't be too quick to write off the lack of depth in the women's XTERRA field, with four World Championships and five series Championships between them these two are a formidable pair which fate happens to have thrust together at precisely the right moment creating an epic rivalry equal to any in sport which has entertained us for years. As with any rivalry while the rivals aggressively push each other to new heights contenders not only have to physically climb to new levels but also break through psychological and public pressures that would not normally exist if not for the two champions established dominance.
2007 has seen the women's XTERRA field temporarily reduced due the pregnancy of over one third of the regular pros and the Crested Butte field reflected this as only four pro women towed the line. Melanie McQuaid was the odds on favorite to win with a potential challenge coming from nearly home town favorite, Jenny Smith of Gunnison, CO (located only 30 miles down the road from Crested Butte). Pro mountain biker Smith has been steadily climbing the XTERRA ranks frequently producing top bike splits but needing to improve her overall performance as a triathlete, translation: she needs a better swim. 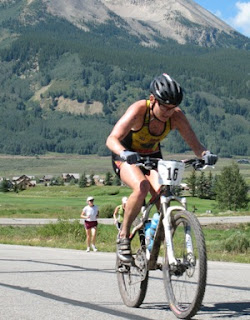 Melanie McQuaid may not have been on her best form.As the racers exited the 1200m swim Smith showed improvement but still lost 2 minutes 36 seconds on the leading McQuaid. However, onto the bike Smith showed she would be someone to deal with on the day as she produced not only the fastest bike split but a ride comparable to some of the top men. Putting 2 minutes 35 seconds into McQuaid Smith all but made up her deficit out of the water. As the two started the run virtually side by side it was obvious this day would come down to a runner's race.
In the early stages of the run McQuaid held strong and looked to be forcing the pace. However, as the course climbed into the mountains of Crested Butte Smith would pull away, eventually outrunning McQuaid by 7 minutes and claiming her first major XTERRA win.
As McQuaid limped across the line it would turn out that she had bruised her foot in the previous week due to a new orthotic insert. However, McQuaid did not claim this as an excuse and insisted that she raced hard but was beat fair and square on the day. McQuaid was gracious in defeat saying "I am beginning an altitude training block and only arrived in Colorado this week. Today was a tough day at altitude for me but Jenny was really strong."
The Crested Butte XTERRA does not represent a changing of the guard but could signal the addition of a new contender at the upper echelon of women's field. With the XTERRA season at just over the halfway point this is defiantly an interesting development.
Men's Race: Leave it to the Mountian Man.
Seth Wealing dug deep to stay close to Middaugh on the bike.With defending XTERRA National Champion Seth Wealing in the field it would seem he was the obvious choice for pre-race favorite. However, Vail Colorado's Josiah Middaugh is and altitude strong man. Middaugh regularly dominates the Colorado snowshoe racing scene often held at over 10,000 feet. He won the old XTERRA Keystone whose course topped out at 12,000 feet. And he lives at over 9000 feet. With Crested Butte's elevation at only 8700 feet Middaugh was the only competitor actually descending for Sunday's race. Middaugh was second in Crested Butte in '05 and could not race in '06 due to a broken knee-cap and was looking to solidify his mountain dominance in 2007. However, Middaugh had his work cut out for him as several fellow Coloradans also chose to make the trip to Crested Butte. In addition to Wealing were XTERRA World Championship 7th place Greg Krause, and 9th place Ryan Ignatz, as well as '06 XTERRA Milwaukee Champion (and women's champion, Jenny Smith's husband) Brian Smith.
As expected Seth Wealing led out the 1200m swim with Middaugh and Krause over a minute back and Ignatz over 2 minutes 30 seconds off the lead. Onto the technical and climbing first section of the bike Middaugh and Ignatz quickly made up ground on Krause and Wealing with Middaugh passing Krause to move into second. Middaugh continue his strong ride toward the fastest split of the day and would catch Wealing as they began the long climb over Strand hill on the courses second loop. Wealing would match Middaugh until an untimely crash allowed a minute gap to open up which Middaugh was able to maintain into T2. Ignatz would produce the second fastest split of the day on the bike moving himself into third by T2 and less than one minute behind Wealing and only two minutes off Middaugh in the lead.
Josiah Middaugh runs to victory. Onto the run the rugged terrain would come into play as Wealing would run hard on the flats but was unable to catch the powerful Middaugh in the hills while Krause would re-take his third place from a cramping Ignatz.
Across the line Middaugh held off a closing Wealing by just 45 seconds while Krause solidified his third place with Ignatz coming home fourth.
With a sold out race and a beautiful day the Crested Butte Bank Crested Butte XTERRA was once again an overwhelming success. However, if you are thinking of trying to do this race next year you had better plan ahead as each year the wait list gets longer and I have never heard anyone say they don't want to come back. 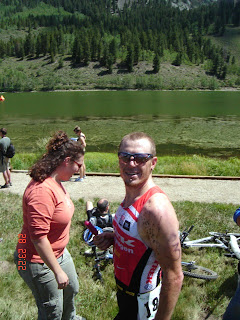 Brian finished in 8th. He'd built up his bike from scratch on Saturday night, as his new replacement frame arrived on Saturday afternoon. A broken chain in the race took him out of contention but a chain tool in his pouch salvaged the race. His anger fueled run saw him post the 2nd fastest run split of the day behind Seth Wealing. 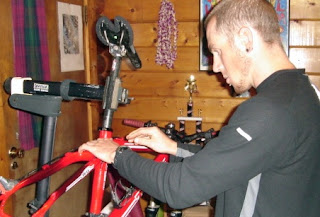 Posted by Jenny Hopkinson Smith at 10:34 PM No comments:

It has been a full month since my last update and I have to tell you life is pretty good.

I absolutely LOVE being in Gunnison in the summer and after a fair amount of travel on my part its seems sweeter to be here in July.

Last weekend I took a trip over to Snowmass for the Colorado State champs. I camped there and it was super chill and social. I felt good racing and won the cross country.
Driving back I met Brian and Max in Crested Butte and we camped up Washington Gulch, where the riding, running, swimming and scenery where stunning. In this world all must be balanced out though and the payback for the beauty is the swarming masses of buzzing biting black flies!

Brian flew to Vermont for the US nationals at Mt Snow this weekend, not a smooth trip it turned out, as he spent 30 hours stuck in Chicago.

Which serves to allow me to appreciate the lack of flying in my near future. Most of our upcoming events are within driving distance and that is a great great thing.

Coming up on our event schedule:
1. Crested Butte Xterra July 29. ( Brian is taking an Xterra clinic there on Sat 18th w/ Melanie McQuaid.) http://www.westelktri.com/ for more info.
2. The Snowmass national mountain bike series finale, Aug 11/12
3. Xterra US series mountain championship -August 18th. In Ogden, Utah.( Brian and I are both invloved in clinics there: www.xterraplanet.com Stop by and say hi if you're there - Brian is w/ Jamie Whitmore at the Mountain bike clinic and I am part of the Art of Xterra clinic.)

Being home in July has other benefits too. The Tour de France as one - its a huge guilty pleasure as it makes me late most days! Our friends gardens are overflowing into our grateful arms with salad and greens.
Here's a couple of my seasonal favorite recipes from this week:
Bok Choy sauted with garlic, shrimp, salt, pepper, and served w/ a sprinkle of parmesan and a spray of Braggs sauce ( like soy).
Salad greens with blueberries, strawberries, fresh raw corn and chopped Brazil nuts (these are high in Selenium-which is a good nutrient to include in our diet, as its often depleted from soil and therefore hard to come by).

Jen.
Posted by Jenny Hopkinson Smith at 6:54 PM No comments: