Brian is back at work. As many of you know he ruptured his pec major tendon and had surgery on it 2 weeks ago.
It was bizarre, the tendon was significantly degenerated and unhealthy? a puzzle.
The surgeon said you usually only see this kind of 'crappy' tendon in body building strength focused ( steroid using) athletes, not endurance ones.
Brian's vices extend to dark dark beers and such but not steroids so its a bit of a mystery.
He was lucky and Gloria Beim did a fantastic surgery. She's stressed his one chance to recover so
He is on the 12 month recovery program and in a immobilising brace for 6 weeks. He's been such a good sport because I know it hasn't been an easy change -to basically complete rest.

Me? I'm great. I am back running again and feeling very grateful albiet ( tired legs.. I had that glory 10 days where I was like yeah, my running is good, and now I have that wow why are my legs feeling like lead - accumulating workload feeling)
I had a fantastic trip to California to coach with the Trek dirt series ladies, Learned so much! 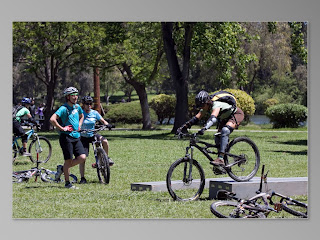 Thanks Brandyn for coming and making it a partner in crime trip.
I've thrown in a couple of MTB races and have the GROWLER coming up this weekend in

Gunnison. I'm doing the 32 fluid oz of riding event, and then hopping on alot of planes , Colorado springs + Dallas + Miami + Sao Paulo + Rio de genero + Manaus. To Brazil for XTERRA Amazon. It'll be an adventure. I'm kinda nervous to tell the truth, my first xterra of the year! 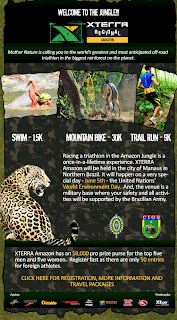 I've really appreciated the later start to my season. I think it fits with where we live in Gunnison. Its felt like an appropriate seasonal time to get going, I feel much more grounded and have enjoyed training more so I have a really good feeling about moving forward into my 2010 race season.
Yeah.
I miss my training partner though, ALOT! It makes me appreciate it too, can't really complain when the fittest fastest member in our house is on the couch!
cheers
Jenny
Posted by Jenny Hopkinson Smith at 7:44 PM

my name is Alexander, I'm a Brazilian journalist and I write for an Internet site focused on running and triathlon (www.webrun.com.br). I'd like to do an interview about Amazon XTerra, is it possible? I've just read you'll be in Sao Paulo in the next days...is it possible for us to meet and talk about the race? If you prefer, we can call you, or send some questions by email...It's up to you... Thanks a lot since now. Contact me on alexandrekoda@webrun.com.br

T4 and the Injured Athlete said...

Hi guys! Brian, so sorry to hear that your summer plans have been a bit tainted. Someone quoted "Life is what happens to you while you're busy making other plans." I figured out what that meant after several months being 'down and out' due to a screwed up knee.
Also, for what it's worth, here's a site that you might want to peruse. The good thing is that you guys live in a gorgeous place so big sky and fresh air will go a looong way. Happy healing, red rock