Race reporting Nova and the GT 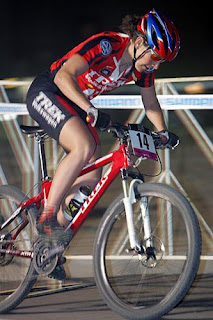 The opening round of the NMBS ( Norba) nationals where in Fountain Hills, Phoenix this past weekend. The Nova weekend had 3 seperate events - a time trial, short track and cross country. I rode the timetrial on friday and it was great to open up and ride the course fast. I posted 5th fastest time to stand on the podium - a motivating way to open up the Nth American season.
I'd not planned on doing the short track ... as the proposed fat boy crit seemed a good one to miss . I changed my mind though when it turned out it was mainly dirt and I was super glad I did. The event was held in downtown Fountain Hills under lights and it made for an exciting venue and atmosphere. Lots of people watching that would have never ever come out to the McDowell Park venue. It was really dusty and sketchy in places plus dark in spots too. Keeping the rubber side down was a good thing! However the racing was fast, hard, it was really exciting and everyone seemed pretty stoked to be doing something different.
Sunday was the XC and my main goal was to get a good start... I was relieved to pull it off and be in around 10th in the single track. Throughout the first lap I moved up into 8th or so and stayed around here riding with a few different people. By the third lap I'd moved into 7th and was headed home when I passed Katerina of Luna running her bike. I thought awesome I'm in 6th.... Not to be though as very soon after that I flatted my rear tire and banged up the rim.... Stans everywhere and not a chance of sealing.... so I ended up running my bike a good 2 miles in.... which sucked in carbon bike shoes, plus it was 90 odd degrees and at the end of a hard race! Oh well.... this was only my second flat ever in a race the previous one being at Mt snow in 2001... Maybe I was due.
It was still a good day out there. As was it a good weekend. For the whole Trek team too. In the Super D Tomarra Mulhfield won the Womens event . In the Womens XC Sue Haywood showed a 'clean pair of heels' to wrap up 3rd place, Rie Katayama in 12th and Mical Dyck of Canada 15th. Check out this link for some good pics.
http://www.cyclingnews.com/mtb.php?id=mtb/2007/mar07/NORBA_1_07/NORBA_1_074
Brian had the Grand Traverse on Friday night. Couldn't have been more black and white in contrast to the Phoenix heat. With fresh snow in Crestted butte turning into a ground Blizzard on top of Taylor pass. 60 mile an hour winds and white out conditions. He and Jesse Crandall finished the event at 10 am Saturday morning to take out 14th place overall. It was a rough day for his equipment too as the new snow on Brush creek road was fluff on top of gravel.... meaning his ski's are much worse for wear.
Enjoy
Jenny

Great Job in AZ Jenny! Sorry about the flat in the xc, you were flying.... up intill that happened. It was nice to see you and cannot wait to do some training with you in CO.

Thanks Tomarra. I just checked the Super D. AWESOME! Nice JOB there. are you going to sea otter? I'm searching flights and on the fence.

awesome job jenny. Glad to see your doing well. Keep it up.

Mandi and Joey Riddle from WV.