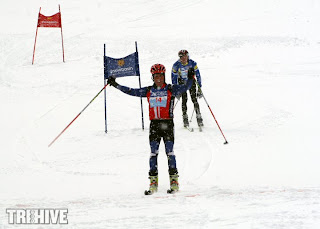 By a nail biting margin over Josiah Middaugh. Brian slid past Josiah 4 gates from the finish of the downhill ski portion to grab the Victory.

For Race media visit these links:
http://www.xterraplanet.com/
http://www.trihive.com/ (great pictures).
www.triathletemag.com
Heres is Brians race report:
3/8/08- Eighty some competitors lined up for the inaugural winter world championship Saturday morning in Snowbasin, UT. The event consists of snow biking 10K, snowshoeing 5K, snow running 5K and randonee skiing 8K. A one of a kind event that showcases many talents and tests the skills of all athletes including the pros. The start line in the men's race included the likes of:
Nicholas LeBrun of France, a two-time ITU Winter Triathlon World Champion, XTERRA Summer World Champion and two-time World Duathlon Champion
Josiah Middaugh, now 3-time National Snowshoe Champion, 5 time Winter Quadrathlon Champion, 4th place finisher at 2006 XTERRA Summer World Championships
48 year-old Mike Kloser, 2-time USAT Winter Triathlon National Champion and national team member at numerous ITU World Championships not to mention all the world-wide success with team Nike/ACG in adventure
Greg Krause, 2008 North American Snowshoe Champion and top XTERRA Pro. Talk about some serious talent. Mike Kloser and I took out the bike but all the heavy hitters maintained contact. Greg and Josiah used their strong snowshoeing and running skills and put the hurt on everybody. Even with a strong chase and running fast Nico and I weren't able to reel back the two during the snow run, prior to the rando ski. Once on skis Greg was showing signs of his efforts and was only a minute up the first climb lugging his heavier at equipment at half the tempo Nico and I were putting out. Josiah was well up the first climb already. Nico and I closed the gap to Josiah to about a minute. At about the halfway point on the skis I overshot a re-skin flag and was called back to the line before I could begin the ascent. I lost about 20 seconds and Nico went by. I closed the gap to about 5 seconds before the top. Nico left to ski a series of panel gates but crashed right after passing Josiah who had also fallen on the same corner. Upon seeing Nico with his skis off and skins out I thought we had one more skin-up and stopped to ask the official who just waved me on. There was final short climb of about 50 feet to the last series of 10 gates. We all opted to herring bone up the last climb to save time. Once I started pushing with my poles I found I was not getting any plant with the right pole. I had lost my basket on a gate on the last descent. Josiah was 5 seconds in front of me and Nico was 5 seconds in the rears. While running the last series of gates Josiah needed to stay upright to take the title. He unfortunately crashed at the fourth to last gate and while snow plowing around the second to last gate I came on the inside to take the race by 1.2 seconds. That was undoubtedly the most exciting race of my life.
Posted by Jenny Hopkinson Smith at 8:32 AM