Anaerobic on the snow 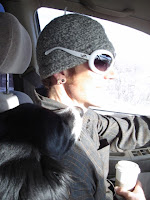 This weekend makes it 3 weeks in a row racing. I am starting to feel pretty comfortable redlining in 10 degrees and 8000 feet. Jenny and I drove to Durango for a winter triathlon yesterday. To our surprise it was 30 degrees clear and sunny. We won't see weather like that till April here in Gunnison. De 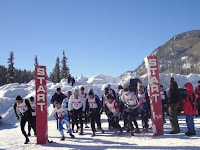 spite a small field the competition was tough for both of us. I had to battle with Ben Sontagg, the German that has won 2 world championships. Ben is living in Durango and racing bikes at Fort Lewis. Spencer Powlison showed up as well. He had a strong showing at the world cup opener in France a week ago. 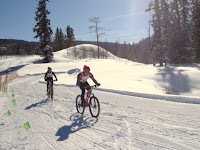 Jenny had strong XTERRA athletes Lisa Lieb and Kate Chapman who are very capable skiers. Molly Hummel was also in attendance, a pro road and mountain cyclist who is a competitive Nordic racer as well.
I took out the run pretty fast to test my body and see what Ben and Spencer had to offer. I put about 10 seconds on Ben but lost it in transition to the bike. Spencer was arriving in transition as Ben and I were off riding. I was able to keep Ben at 45 seconds and put time on Spencer through the bike. Once on skis Ben showed everyone why he has won the world championships twice. Ben put nearly 4 minutes on me in the 7K skate! I felt pressure to keep him from lapping me on the 3 lap ski course. I was psyched to get such high level competition 2 weeks from nationals. I still need work on the bike and ski in order to have a shot at a national championship.
Jenny had strong runners at the start but she was in control by transition leading the women's field. She opened up gap on the bike and skied home for a comfortable win. Not bad for her first winter triathlon and very little Nordic experience. 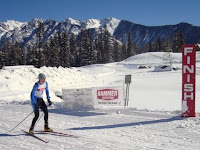 http://www.insidetri.com/portal/news/news.asp?item=111874
After a night in Durango we returned to Gunnison for the Kenny Mac Nordic race at Hartman's Rocks. We were too late for the 15/30K skate races but made the start of the Super XC race. This event included a 250 foot climb up Kill Hill, a short flat recovery for about 2 minutes, another steep climb up 100 feet then a 250 foot plunge down the technical Notch and Collarbone Alley to the finish. There were wax less skis, wax able skis with skins and no skins and AT skis with skins. I opted for the wax able skis with skins and kept the skins on the whole time. We started with a lemonds start (run to the skis) and I had a lead with another skier hot on my tails. It was Rebecca Dussault, one of the US Olympians from Torino. She had wax ables without skins. I pulled away and had about 30 seconds by the top of the climb. By the time we hit the notch she has closed it to around 10 seconds. I took conservative lines and skied powder. Rebecca crashed twice but was back in contention by the flats coming into the finish. I just managed to hold off Rebecca by less than 3 seconds. 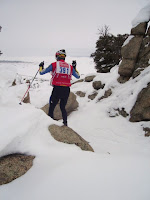 It was nearly a photo finish. Jenny took some pictures during the race, she isn't a fan of downhill skiing and someone had to look after Max. Jenny is off to Australia Thursday and I am looking forward to my last preparation race prior to winter triathlon nationals, the Alley Loop 21K skate race Saturday the second. Hope everyone is enjoying their winter. Feel free to comment on our blog, we would like some feedback. 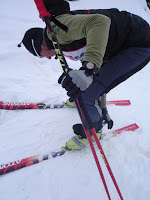 You guys are making the rest of us look like uber slackers! I want to spend a couple weeks in Gunny with the snow sometime. Good luck at Nationals, Brian.